The interest of the group are divided between clinical research that concerns follow-up of patients after hematopoietic stem cell transplantation (HSCT) and solid organ transplantation (SOT), i.e liver, kidney and pancreas/islets, and more basic research in the field of transplant immunology. Due to close contact with the service of haematology (Prof Passweg, Dr Kindler), the service of Nephrology (Prof. Martin, Dr Hadaya), and the service of transplantation (Profs Mentha, Morel, Buhler and Berney) we have an access to patient samples and we also serve as repository for cells and DNA samples of transplanted patients. Our main research project is focused on natural killer cells (NK cells). These cells make the link between innate and adaptative immunity and are implied in anti-tumoral and anti-viral responses. Additionally, they also seem to play a role in the immune response's regulation. In SOT, NK cells are implied in the anti-viral response, which is particularly important since the patients are under high doses of immunosuppressive treatments with lymphocytes T as principal targets. As NK cells express a complex network of receptors, the group is interested in analyzing the genetic influence of these receptors on the immune response after SOT and also HSCT. Furthermore, NK cells were showed to play a major role in the graft effect against leukaemia in haematopoietic stem cell transplantation. The group is interested in amplifying to a wide scale these NK cells ex vivo with cytokines in order to reinfuse them into the patients. We also developed close collaboration with the Service of Hematology to analyse the influence of mesenchymal cells which seems to have an important immunomodulatory activity on NK cells. Finally, thanks to a long lasting active collaboration with the Division of Bone and Mineral Metabolism (Prof. Ferrari) we have an interest in osteoimmunology by analysing the influence of the proinflammatory cytokines IL-15 and IL-21 on T lymphocytes and NK cells on bone loss in primary and secondary bone remodelling animal models as well as in vitro assays, studying the interplay between immune and bone cells.
Our national collaboration include the "réseau romand de transplantation with le CHUV" (Prof. Pascual, Dr V. Aubert), the network of the Swiss University Hospital which have a programme of HSTC or SOT and at the international with the Transplant Biology Resesearch Center, Massachusets General Hospital (Pr. M. Sykes and D: Sachs) et the Beth Israel hospital (Pr. T. Strom), both in Boston, MA. 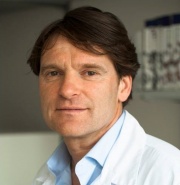