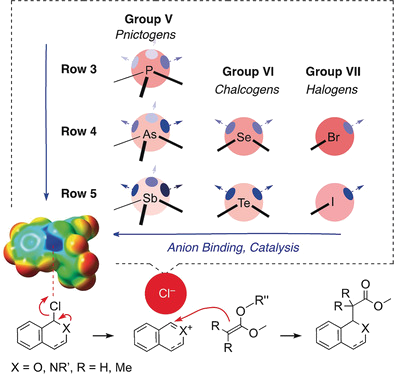 Halogen‐ and chalcogen‐based σ‐hole interactions have recently received increased interest in non‐covalent organocatalysis. However, the closely related pnictogen bonds have been neglected. In this study, we introduce conceptually simple, neutral, and monodentate pnictogen‐bonding catalysts. Solution and in silico binding studies, together with high catalytic activity in chloride abstraction reactions, yield compelling evidence for operational pnictogen bonds. The depth of the σ holes is easily varied with different substituents. Comparison with homologous halogen‐ and chalcogen‐bonding catalysts shows an increase in activity from main group VII to V and from row 3 to 5 in the periodic table. Pnictogen bonds from antimony thus emerged as by far the best among the elements covered, a finding that provides most intriguing perspectives for future applications in catalysis and beyond.