Abstract
In clinical settings, human movement analysis has become an essential tool to identify, characterise and follow the evolution of the locomotor system pathologies, as well as to assess the efficacy of a rehabilitation program or a surgery. Classically, this approach relies on the measurement of the 3D trajectories of a set of reflective skin markers by the mean of an optoelectronic system. The position and orientation of bony segments is then estimated during a movement using these trajectories. An accurate joint kinematics estimation is crucial to properly identify and quantify pathology-related movements’ abnormalities. 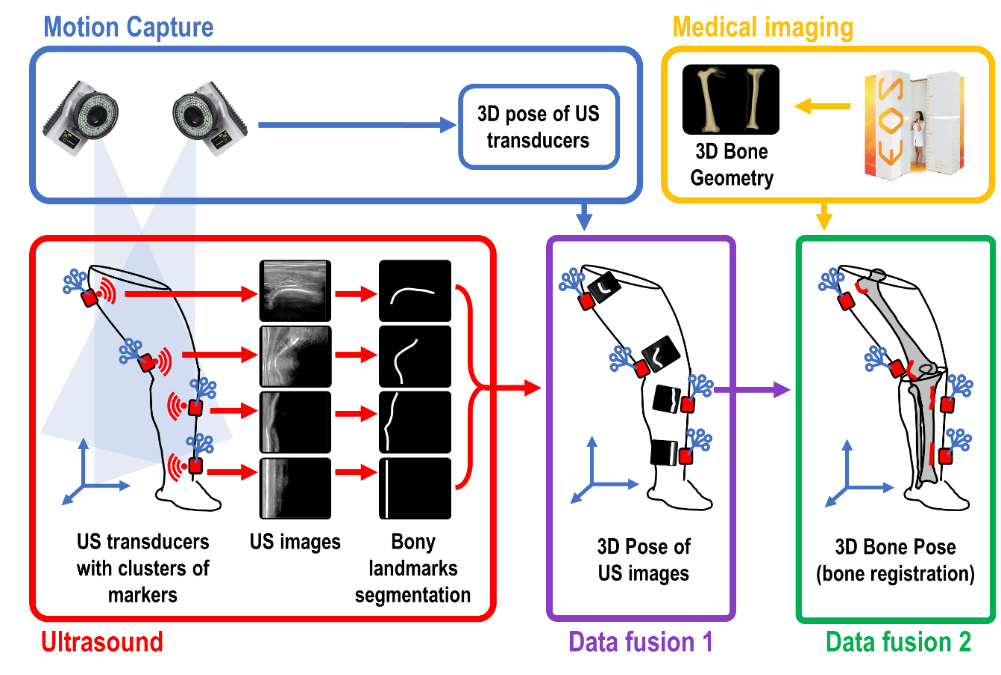 However, the relative motion between the cutaneous markers and the underlying bones, known as soft tissue artefacts (STA), introduces significant errors that limit the accuracy of the measurements. To date, researchers have been using highly invasive methods to tackle this issue (intra-cortical pins or bi-plane fluoroscopy). Another solution is the fusion of ultrasound (US) imaging with traditional motion capture. The fusion method consists in calibrating the US transducer in such a way that the position of each point of the US plane can be measured in space. Hence, by combining multiple images of the same bone it is possible to reconstruct its position and orientation in space and to cancel STA. This project thus aims to develop an innovative system allowing the fusion of B-mode ultrasound and marker-based motion capture to track the knee kinematics during gait. It will be validated ex vivo, tested in vivo and its applicability in clinical settings will be evaluated.