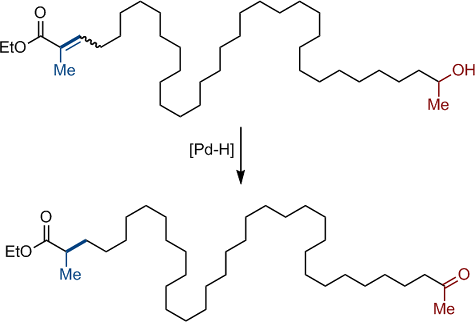 The long-range deconjugative isomerization of a broad range of α,β-unsaturated amides, esters and ketones by an in situ generated palladium hydride catalyst is described. This redox-economical process is triggered by a hydro-metallation event and is thermodynamically driven by the refunctionalization of a primary or a secondary alcohol into an aldehyde or a ketone. Di-, tri- and tetrasubstituted carbon-carbon double bonds react with similar efficiency, the system is tolerant towards a variety of functional groups and olefin migration can be sustained over 30 carbon atoms. The refunctionalized products are usually isolated in good to excellent yield. Mechanistic investigations are in support of a chain-walking process consisting of repeated migratory insertions and β-H eliminations. The bi-directionality of the isomerization reaction was established by isotopic labelling experiments using a substrate with a double bond isolated from both terminal functions. The palladium hydride was also found to be directly involved in the product-forming tautomerization step. The ambiphilic character of the in situ generated [Pd–H] was demonstrated using isomeric trisubstituted α,β-unsaturated esters. Finally, the high levels of enantioselectivity obtained in the isomerization of a small set of α-substituted α,β-unsaturated ketones augur well for the successful development of an enantioselective version of this unconventional isomerization.